We See the Damage Caused by the Wrong Handling of Migration: Interview with Michael W. Doyle

Given the plans of Michael Doyle and other experts, the conflicts over the UN migration pact were only omens. He proposes a broader binding mobility convention. 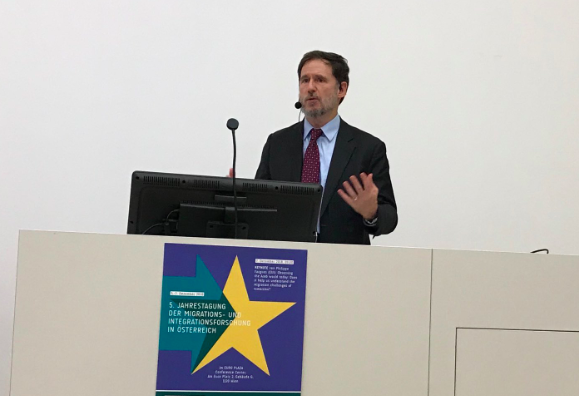 Michael Doyle knows that he is at the beginning of a long journey. The plan, presented by the US political scientist last week at the invitation of the Academy of Sciences and the University of Vienna, is in stark contrast to the current global developments in dealing with migration. He leaves the much-discussed UN migration compact pale.

The new Model International Mobility Convention (MIMC), developed by more than 40 academic experts, mostly from the United States, provides for a comprehensive legalization of the global use of human mobility, from day trips to tourism and labor migration to asylum seekers. The document proposes a fundamental rethinking of the international community.

Migration should become a common cause of all states in the world, with clearly defined rights, and obligations for all concerned. In the interview, Doyle addresses the scope of this new human rights declaration for dealing with mobility in a globalized world – and expresses its chances of implementation.

Brickner: Right-wing and anti-immigration parties are currently on the rise. This is not contrary to a plan as you envision it in the International Mobility Convention. Why are you presenting the model now?

Doyle: The current situation is very damaging to the objectives of the Mobility Convention, that’s right. But right now, we see the damage caused by the wrong handling of migration. Political circumstances may be different in five or ten years, with a view to reforming the global migration regime. Why should the intellectual preparations do not begin now?

Brickner: Was it a coincidence that work on the Convention started in 2015, the year of the great flight to Europe?

Doyle: Absolutely not. At that time, when many people from the Middle East set out, things were in flux. Questions arose about the legal framework of this refugee and migration movement. From my perspective, it was about the US shared responsibility for the wars and thus the flight movements in the Middle East.

Brickner: The Mobility Convention proposes a number of additional rights for migrants, refugees and all people crossing national borders. What would the states have in return for benefits?

Doyle: Countries where many people migrate would, for example, allow legalized and more effective access to remittances. These are very large sums. States hosting many refugees would share responsibility for them with all other states through a global mechanism. Host countries such as the US and EU countries would benefit from stronger security rules when crossing national borders.

Brickner: The Convention relies on strong states with strong borders. Does this not promote nationalism?

Doyle: It aims to ensure safe, orderly mobility of people, over which sovereign states decide. Open borders are not planned.

Doyle: Because what you call nationalism also expresses that states are communities, with a strong sense of commonality. It’s like a club you can only enter when you’re invited. Such a community requires an external border.

Brickner: What improvements does the Mobility Convention bring to migrants, refugees and other travelers?

Doyle: Their mobility is provided on a comprehensive legal basis. In the state of arrival, they have legal certainty and know which state offers they can expect and what their duties are.

Brickner: What are the limitations of the Mobility Convention for travelers?

Doyle: Illegal border crossing is prohibited. Asylum seekers must make their protection at the border credible. Anyone entering without authorization must be withdrawn from the country of origin. All these would be, under the Convention, worldwide guaranteed rights and obligations.

Doyle: Existing human rights are sufficient, but standards must be formulated for cross-border human mobility, such as the rights of tourists or students.

Brickner: For example, tourists, what consequences would the juridification for tourism in a country like Austria?

Doyle: Few, because the legal and business standards for tourists in Austria are both national and at the EU level. But that’s not the case in many other states. Even simple rules, such as that a tourist must behave respectful to local customs and that sex tourism is prohibited, should become binding worldwide.

Brickner: A fundamental change is the extended asylum concept in the Mobility Convention. This would apply equally to people with traditional asylum claims and to so-called forced migrants. For example, for the number of conflict refugees currently receiving subsidiary protection in the EU. Why does this innovation need it?

Doyle: Because both persecution facts are the same, humanitarian. Those who are persecuted in the country of origin by criminal gangs or because of their gender or whom climate change robs of any livelihood, whose bare life is as threatened as that of any political, religious or racial persecutees.

Brickner: Does that mean that according to the Mobility Convention, climate refugees should be granted asylum in other states?

Doyle: Yes, if the country of origin as a whole has become uninhabitable, which will be the case in the case of low-lying islands. If, on the other hand, survival is possible in other regions of the country, the principle of domestic flight alternatives applies. For industrialized countries like Austria, protection for climate refugees is a moral imperative. After all, these states bear historical responsibility for the increasing CO2 emissions and, thus, for global warming.

Brickner: That’s pretty radical. Recently, two far less-overreaching ones, the UN Migration Compact and the UN Refugee Compact, have caused political upheaval. How do you rate the Compacts?

Doyle: As important steps, but without legal obligation. The Mobility Convention, on the other hand, is conceived as a binding agreement. The advantages for signatory states result from the fact that all other signatory states also comply with the regulations.

Brickner: It will probably take until the signing, because many people reject immigrants. What needs to be done to convince the general public of the need for global migration rules?

Doyle: In rich, democratic states, that will only work if the weaker, the more vulnerable are treated fairer again. In the US, for example, the rights of workers have been reduced, the education system has been weakened and the infrastructure has decayed. That is what needs to be changed. In order to gain acceptance for a set of rules such as the Mobility Convention, it is necessary to invest in the locals so that they regain confidence in politics.